Eric Kwartler, a staff attorney at South Texas College of Law Houston (STCL Houston), has conducted extensive research on illegal evictions in Harris County from March 27 to July 25, 2020 — the moratorium period mandated by the U.S. Congress through the CARES Act to prevent evictions.

The alarming data uncovered by Kwartler and his team of students in the law school’s Randall O. Sorrels Legal Clinics undermines the prevailing narratives about the efficacy of the CARES Act.

Today, Kwartler released his proprietary data revealing that more than one in five — nearly 24 percent — of all evictions filed in Harris County during this moratorium were illegal. Regardless of whether the tenants ultimately lost their homes, these eviction filings will remain on the tenants’ records for years, significantly impacting both their employment and housing opportunities.

“With the shockingly high rate of evictions filed in violation of the CARES Act moratorium, Harris County stands as a tragically clear example of the substantial legislative and enforcement shortcomings of the Act,” said Kwartler.

Kwartler’s team — who worked closely with pro bono attorneys from Houston Volunteer Lawyers and Lone Star Legal Aid on their research — used a database they created to carefully analyze the more than 5,600 evictions filed in Harris County during the moratorium period. Of this number, they were able to confirm that 1,334 of these cases were illegal evictions, leaving tenants with little recourse without effective legal representation.

According to Kwartler, in multiple Harris County courts, almost half of eviction cases filed during the moratorium should have been barred.

Because Congress failed to provide clear guidance for the CARES Act — in addition to its lax verification process for Texas judges and an absent federal or state enforcement mechanism — a dire situation has been made even more complex and threatening for thousands of low-income Houstonians.

In late March, President Donald Trump signed a federal moratorium forbidding certain categories of properties from filing evictions for unpaid rent, including properties with a federally backed mortgage; public housing properties; low-income, tax-credit properties; and properties that lease to tenants with Housing Choice/Section 8 vouchers. Critically, if one tenant of an apartment complex has a Housing Choice voucher, every tenant in the building is subject to the same CARES Act eviction protection.

While a public database of multifamily properties with federally backed mortgages exists, no such database exists for properties that take vouchers. As a result, tenants and attorneys alike have had no way to tell whether landlords who filed evictions were covered by that provision. To remedy this situation, Kwartler and Leesa Everitt, an attorney with Houston Volunteer Lawyers, filed a Texas Public Information Act request with both the Harris County Housing Authority and the Houston Housing Authority for the address of every tenant in Harris County receiving assistance from the U.S. Department of Housing and Urban Development.

With this information, Kwartler created Harris County’s most comprehensive database of properties covered by the CARES Act.

Despite the difficulties with identifying properties covered by the CARES Act, until the Supreme Court of Texas issued its 15th COVID-19 Emergency Order May 15, landlords were not even required to address whether their property was covered before they could evict tenants. This lack of accountability and enforcement left over 1,000 Houston-area families — who should have had federal protection from eviction — facing nearly insurmountable housing crises amid growing COVID-19-related unemployment.

Though the CARES Act moratorium now is over, these concerns have not gone away. Thousands of evictions filed during the moratorium still are active in the courts, and landlords of covered properties still are required to give a 30-day notice to tenants they want to evict. However, many ignorant or unscrupulous landlords are ignoring that requirement, giving covered tenants three days, rather than 30 days, to move.

Harris County landlords continue to systematically violate the CARES Act, and Kwartler and his team — with their proprietary data — are the only ones able to measure the scale.

In addition to facing the end result of eviction, tenants must confront the very real threat of COVID-19 exposure from attending packed courthouse proceedings and securing new housing during a pandemic.

In a quote provided to the Washington Post earlier this month, Kwartler notes, “Many people don’t realize that the actual process of eviction poses a significant danger to public health. Even with the CARES Act moratorium in place, Houston-area tenants frequently have been forced to risk infection by congregating with over 100 people at a small courthouse just to attend their eviction trials, and the vast majority of them have lost anyway. Imagine what it will be like when the moratorium is gone.”

That time is now. The CARES Act officially expired at midnight July 24.

“Thousands of people and families received eviction notices during the CARES Act moratorium who should have been covered — and they continue to face eviction at an alarming rate,” said Kwartler. “No other legal aid organizations are capable of monitoring this situation.”

“We have a very specific mission,” said Kwartler. “To combat massive noncompliance with the CARES Act in our region, we’re working to provide pro bono legal representation to unlawfully evicted tenants. This is the only way to ensure enforcement of this widely misunderstood and abused Act.”

Kwartler is quick to applaud the thousands of Harris County landlords who remain in compliance with the CARES Act, as he simultaneously works to support tenants of less law-abiding landlords.

Houstonians facing illegal evictions — or those who are unsure of their legal rights — are encouraged to contact STCL Houston’s Randall O. Sorrels Legal Clinics at 713.646.2990 or complete the Clinics’ online contact form on the law school’s website to learn about their rights and legal options. 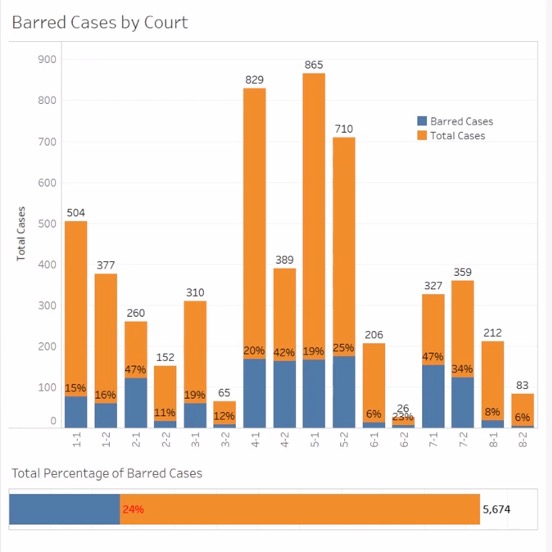