Sixteen students from nine law schools across the country participated in the competition, which includes five rounds of mediation problems. In each round, competitors were judged on their effectiveness in demonstrating neutrality, explaining the mediation process, active listening, and other pertinent mediation skills. This is the second win for South Texas College of Law Houston in the four years the law school has competed in the Abrams Competition; both winning teams were coached by Kristyn Koch ’14.

South Texas College of Law Houston’s alternative dispute resolution teams regularly compete in up to nine events each year—more than any other law school in Texas. The law school’s rigorous selection process, combined with the leadership of program director Debra Berman and several dedicated alumni coaches, has garnered the school 11 national and international first-place wins in recent years. 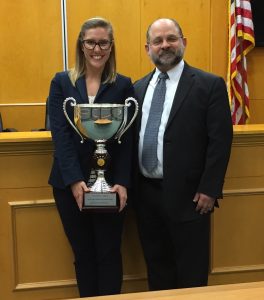 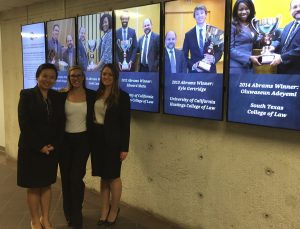 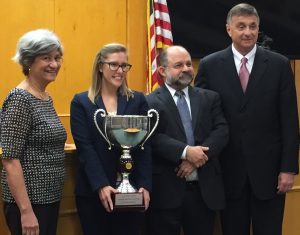 Amanda Gordon with judges from the left Josefina Rendon, Jeffrey Abrams and Joseph Farnan on the right.