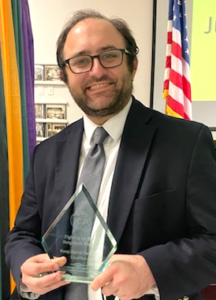 The Texas Gulf Coast Area Labor Federation presented South Texas College of Law Houston, along with the other partners in the Keep Harris County Housed coalition, a Fighting for Our Neighbors award during the April 23 Working Family Awards Celebration.

“It is an honor to be recognized by the Texas Gulf Coast Area Labor Federation for our participation in the Keep Harris Housed coalition,” Kwartler said. “But the greater honor was the opportunity to unite with such diverse community stakeholders to help keep thousands of vulnerable Harris County residents in their homes during an unprecedented crisis. We look forward to our continued work with the Keep Harris Housed coalition to promote housing stability and prevent eviction in Harris County.”

During the pandemic, STCL Houston’s Landlord/Tenant practice has helped over 5,000 people 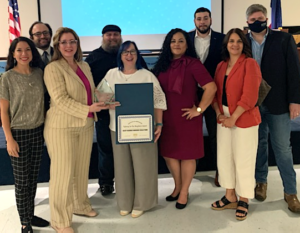 facing housing instability through a combination of community outreach and courtroom advocacy. Kwartler has personally represented over 370 households in court and has helped secure over $500,000 in grant money to expand the program. When the CDC promulgated its eviction moratorium, he created a drive-thru clinic program to help people fill out the required declarations. Those clinics eventually grew to include help with applying for rental assistance.

While STCL Houston started the drive-thru clinics, Kwartler explained that Jay Malone, political director for the Texas Gulf Coast, was the driving force behind the expansion of those efforts.