Dean Treece — or treasured “Coach” to the countless STCL Houston students privileged to benefit from his one-of-a-kind instruction in law and life — leaves an indelible legacy on the law school, the legal profession, and in the lives of his family, students, colleagues, and friends.

Treece served his country and earned a Bronze Star in the Vietnam War, shared his expertise as a trusted legal analyst for local and national media outlets, and was a lifelong baseball fan. He trained many of the sharpest legal minds and lawyers in the country.

While many considered him a legal “jack of all trades,” Treece’s expertise included constitutional law, civil rights, torts, and trial and appellate advocacy.

Treece — STCL Houston vice president, associate dean, professor of law, and director of the school’s nationally renowned Advocacy program for more than 40 years — first launched South Texas’ mock trial and moot court program in August 1978, at the time noting, “South Texas College of Law has the potential to produce the best Advocacy team in the country… all we need to do is develop it.”

In an email to STCL Houston’s more than 15,000 alumni in all 50 states and 13 countries around the world, STCL Houston President and Dean Michael F. Barry noted, “No words could encompass what a profound and far-reaching impact Coach Treece has had on South Texas for more than four decades. His vision, dedication, generosity, warmth, and unfaltering commitment to his students and to the Advocacy program have left a lasting mark on our institution and our community. He was a beloved teacher, coach, mentor, advocate, colleague, and friend to so many of us.

“We are thankful for Coach’s life, his indominable spirit, and the wonderful contributions he has made to South Texas and to generations of students.”

Upon the law school’s 123rd national advocacy championship, Treece said, “Advocacy is addictive. I never tire of seeing talented students realize their potential in moot court activities. It’s like turning on voltage to a neon light. When a student has the magic, suddenly everything comes alive in a courtroom. The people who are meant for the courtroom are not meant for anything else. They’re never going to be happy unless they’re in the battle.”

In September 2018, STCL Houston recognized Treece’s 40th anniversary at the law school with an honorary reception attended by more than 100 friends, alumni, and members of the Houston legal community. At the event, former STCL Houston President and Dean Donald J. Guter said, “There are many words I could use today in honor of our friend and colleague, Dean Treece. These include: ‘dedicated,’ ‘loyal,’ ‘hardworking,’ ‘supportive,’ ‘exceptional,’ ‘generous,’ ‘funny,’ and ‘kind.’ But the word I believe best describes him is ‘legacy.’ A legacy is a gift, and Dean Treece has been a true gift to his students in the classroom, his advocates in the courtroom, and his colleagues at the law school for four decades.”

Treece’s former student advocates effusively applauded their mentor at the event for his guidance, dedication to students, commitment to their learning, and ever-present humor.

Brad Gilde ’04 noted, “I owe all that I am as a lawyer to you and your program. Thank you, Coach.”

Tony Taft ’98 of the Tony Taft Law Firm said, “To me the genius of the Advocacy program is how Coach Treece has trained his advocates so well, and then, he has encouraged those advocates to coach subsequent teams. The beauty of the program is it’s going to be self-sustaining even after Coach retires, because he’s always encouraged those who have gone through the program to come back and help.”

In 2018, STCL Houston alumni answered a challenge by the Beaumont Foundation, matching its $100,000 gift, to establish the T. Gerald Treece Endowed Scholarship at the law school. This scholarship, granted annually in honor of Treece, benefits exceptional student advocates who demonstrate a significant financial need.

The late David V. Wilson ’93 — a former STCL Houston national advocacy champion and chairman of the “Coach’s Circle” committee charged with raising funds for the T. Gerald Treece Endowed Scholarship — noted, “Dean Treece, or ‘Coach’ to most of us, was not just our personal mentor. He has impacted countless lives and impacted thousands of students. I know I speak for my fellow donors when I say that his impact on the law school and the greater legal community, in addition to his impact upon our own lives, motivated our giving.”

Since Treece established STCL Houston’s Advocacy program — providing an exceptional training ground for thousands of future litigators — the law school continues to earn national and international acclaim for its excellence in Advocacy training.

At STCL Houston’s 40th anniversary reception in his honor, Treece said, “For the past 40 years, it has been my honor to teach students how to practice law in a courtroom… You guys have been my life. Painters and conductors have works they are proud of. I’m proud of you.”

STCL Houston will share information on memorial services for Treece as they become available. Those wishing to share condolences and stories about Treece — as well as make donations to the T. Gerald Treece Endowed Scholarship at the law school — are encouraged to visit www.stcl.edu/coachtreece.

T. Gerald Treece — Vice President, professor of law, and director of South Texas College of Law Houston’s (STCL Houston) “Best in the Nation” Advocacy program for more than 40 years — passed away Monday, July 13, 2020 after a long illness. He leaves behind an indelible legacy of unwavering dedication to generations of STCL Houston student advocates, a commitment to excellence and integrity in law and life, and a fierce devotion to his family, friends, colleagues, and supporters at Houston’s oldest law school. 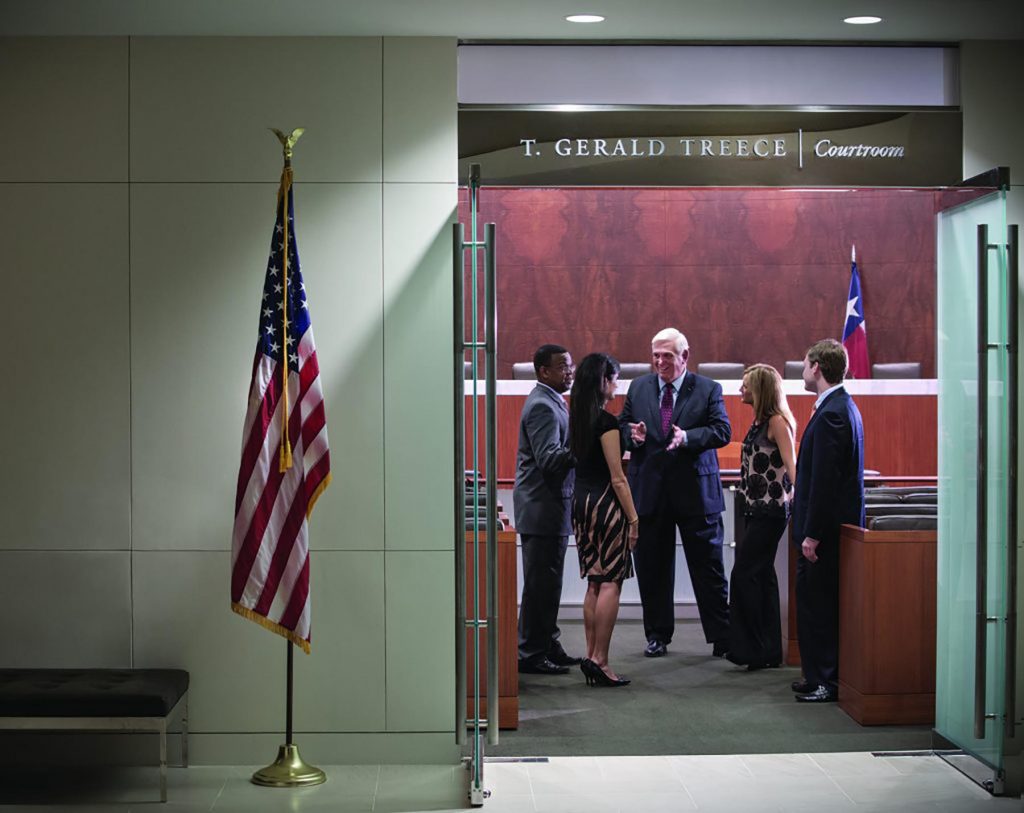 T. Gerald Treece, center, gathers with advocacy students in the foyer of the T. Gerald Treece Courtroom, named in his honor, at South Texas College of Law Houston. Treece, professor of law and director of STCL Houston’s nationally renowned Advocacy program for more than 40 years, passed away Monday, July 13, 2020 after a long illness.