South Texas College of Law Houston students Brad Eric Franklin, Hayley Hervieux, and Chase Newsom recently won the school’s 123rd national advocacy championship. No other law school in the United States has won half as many. South Texas is one of only three national law schools consistently ranked in the top 10 for trial advocacy by U.S. News & World Report. 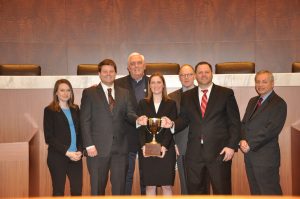