Student Amanda Gordon won first place at the University of Houston’s Jeffry S. Abrams National Mediator Competition, which drew 16 competitors from nine law schools across the country for five rounds of mediation problems. In each round, judges evaluated students on their effectiveness in facilitating negotiation, demonstrating neutrality, active listening, and other pertinent mediation skills.

This is the second Abrams Competition win for South Texas College of Law Houston in the four years the law school has competed in the tournament. STCL Houston alumna Kristyn Koch (‘14), contract coordinator at Shell Oil Company, coached both winning teams.

The law school’s ADR teams regularly compete in up to nine events each year – more than any other law school in Texas. STCL Houston’s rigorous selection process, dedicated alumni coaches, and the leadership of Debra Berman, director of the school’s Frank Evans Center for Conflict Resolution, have garnered 12 national and international first-place championships in recent years.

The triathlon – a joint initiative of the Hugh L. Carey Center for Dispute Resolution and the Financial Industry Regulatory Authority (FINRA) – united law students from 18 schools across the country for two days of negotiation, mediation, and arbitration of a securities dispute. Teams composed of three students played the roles of lawyers, clients, investors, and broker-dealers as they took turns engaging in real-world, dispute resolution processes. In the final round of the triathlon, the teams showcased their arbitration skills, with one student conducting direct examination, another student leading cross-examination, and the third student playing the role of a witness.

Members of FINRA served as mediators, judges, and arbitrators, evaluating and offering advice to the teams to enhance their advocacy skills. STCL Houston was the only school to sweep all judges in all rounds of the competition. This is the second time the law school has won the Securities Dispute Resolution Triathlon.

“Participating on a competition team gave me incredible insight into the discipline required to successfully practice law,” said Piper. “Knowing that your school equips you to excel against students from institutions all over the country is extremely satisfying. Knowing that your hard work paid off is indescribable.”

Gordon concurred, “My competition experience absolutely will help my career as an attorney because of the communication tools I have acquired.”

The Frank Evans Center for Conflict Resolution serves as the focal point for dispute resolution education at STCL Houston. The Center’s primary mission is to train law students in both the theoretical foundations and practical applications of dispute resolution policies and procedures. Currently, STCL Houston offers eight ADR-related courses, including a mediation clinic, and a 40-hour basic mediation training, open to both students and professionals. Approximately 125 students obtain the school’s 40-hour mediation certificate each year.

“I am proud of our students’ regular success in dispute resolution competitions,” said Berman. “Because a strong work ethic and preparedness are central traits of successful attorneys, the Center’s competition program emphasizes the importance of diligence and hard work. We believe that our students’ competition success is reflective of those foundational goals and values.” 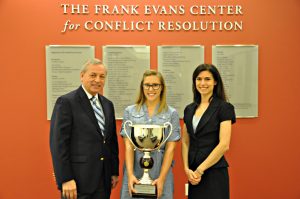 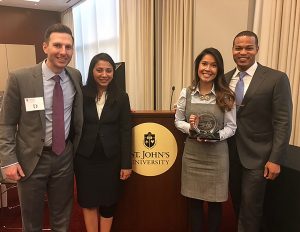