The NAACP Houston Branch and South Texas College of Law Houston (STCL Houston) will sign a memorandum of understanding affirming their joint efforts to fight for long-overdue justice and clemency for soldiers of the 24th Infantry Regiment at Camp Logan (now Memorial Park), who were unjustly convicted and punished by General Court Martial in 1917 for their involvement in riots in Houston after a series of racially-charged incidents and continued abuse of Black soldiers.

Founded in 1923, South Texas College of Law Houston is the city’s oldest law school, with a mission of diversity and access and a purposeful focus on justice.

Founded in 1909, the NAACP is the nation’s oldest and largest grassroots civil rights organization. The Houston Branch was founded in 1918. 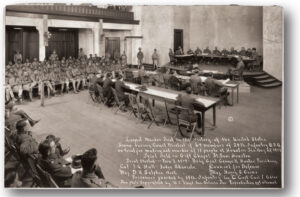 The NAACP Houston Branch and STCL Houston share common priorities and interests in ensuring an accurate historical narrative of the events that transpired at Camp Logan and the stories of the soldiers involved. Because of their shared commitment to equal justice under the law, the NAACP and STCL Houston are collaborating to fulfill the mission of obtaining clemency and/or pardon for the Camp Logan soldiers.