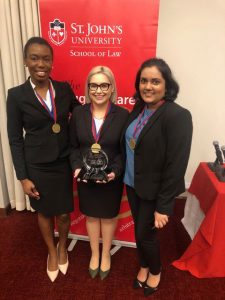 STCL Houston students have won this competition three out of the past six years.

The third-year student team of Ivy Cuellar, Assumpta Iheasso, and Haniyah Naeem defeated 20 other teams from across the nation and bested American University Washington College of Law, Pace Law School, and Rutgers Law School in the three rounds.

During the competition — hosted by St. John’s University School of Law — students advocate on behalf of a client in a negotiation, mediation, and arbitration. Throughout the two-day triathlon, students compete as advocacy lawyers, settlement counsel, and clients in a securities dispute. This year, students disputed a timely competition problem regarding a brokerage firm’s permissible scope of supervisory authority when surveilling a broker’s personal email and data that is stored on a company-issued laptop. STCL Houston alumnae Jayelle Lozoya ’18, Assistant District Attorney at the Harris County District Attorney’s office, and Urvashi Morolia ’17, associate attorney at Thompson Coe in Houston, returned to the law school to coach the winning students.

“Our success at the competition is due to the long hours, hard work, and raw talent that the students were able to bring to the table.” said Lozoya. “Having competed in this same tournament during law school, I knew just how difficult this competition could be and how rewarding it was for the competitors to have won a national championship in their last year of law school. These students have a bright future ahead of them!”

STCL Houston’s ADR teams regularly compete in up to nine events each year — more than any other law school in Texas. The law school’s rigorous selection process, dedicated alumni coaches, and the leadership of Debra Berman — director of the Frank Evans Center for Conflict Resolution — led preLaw magazine, a National Jurist publication, to rank STCL Houston a “Top Law School for ADR” in 2019.

“I spoke to my teammates before giving this statement because our win was a collective effort,” said Iheaso. “Winning was a huge plus but the knowledge we gained during the process is what we will take with us into practice. Thank you to our coaches, Jayelle and Urvashi, who taught us the skills we needed to succeed and remained patient with us throughout the weeks of practice. Lastly, a huge thank you to our fellow classmates and colleagues who made themselves available as sparrers during practice rounds.”

The Frank Evans Center for Conflict Resolution serves as the focal point for dispute resolution education at STCL Houston. The Center’s primary mission is to train law students in both the theoretical foundations and practical applications of dispute resolution policies and procedures. Currently, STCL Houston offers eight ADR-related courses, including a Mediation Clinic, and a 40-hour basic mediation training, open to both students and professionals. Approximately 100 students obtain the law school’s 40-hour mediation certificate each year.