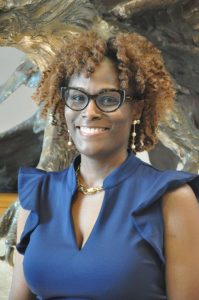 Kenesha Starling earned the esteemed role as the first black editor-in-chief of South Texas Law Review since the school’s founding in 1923.

“Having a professional background, I tend to see things a bit differently from my peers,” said Starling. “Generally, when people think of diversity, they only consider color or ethnicity, but I think diversity is also background, age, and the wealth of experiences that go along with that.”

Starling is eager to bring her business acumen and corporate experience to her editor’s chair during her final year in law school.

For nearly two decades, she has worked full time for a federal agency, a role she first began as an intern her senior year at Texas Southern University. In addition to juggling full-time employment and working toward an MBA, she also became a mother during this time, celebrating her graduation from the University of Houston Clear Lake with her then 1-year-old son, Darius.

Currently, Starling maintains her full-time career and cares for her nearly 15-year-old, highly active son, while taking 11 hours of coursework at STCL Houston — only one hour less than her full-time classmates.

She is accustomed to wearing many hats and exceeding expectations in her professional and personal endeavors, but she acknowledges that becoming “the first” in any area brings a heightened sense of responsibility.

“There is a lot of pressure that comes with being the first in anything because people see you as a role model,” she said. “They wonder if you’ll fall into a certain stereotype or be better or worse than your predecessors. Most of all, you must do your best, more for those coming behind you than for yourself. Because the reality is — if you don’t knock it out of the park — that “failure” becomes a stigma and follows everyone who looks like you. That’s a weighty but exciting opportunity.”

Starling remembers seeing a poster celebrating Black History Month in 2017 that read, “Be it spacesuit boots, pumps, or sneakers — be sure to leave footprints in your wake.”

“That’s how I see this,” she said, referring to her role as the first black student to lead the South Texas Law Review. “This is an opportunity for us to leave our footprint, our chance to do things a bit differently, a bit better… to shake things up a bit. Our school has a rich and impressive history; our alumni are Texas Supreme Court justices, judges, U.S. and district attorneys, and presidents of state and local bar associations, to name a few. Our Law Review should reflect that same culture; it should be a leading resource for the legal community. It is not enough to be on Law Review— we have to increase our presence, open doors for all the law students who follow our stead as the esteemed South Texas Law Review.

“Kenesha has achieved a truly significant milestone as the first black editor-in-chief of South Texas Law Review — not only for herself, but for all minority students at the law school,” said STCL Houston Professor Shelby Moore, a personal mentor for Starling. “STCL Houston always has celebrated diversity and this important accomplishment furthers the school’s inclusive environment and reputation as a school of accessibility to all.”