The building will be open today, Sept. 23, from noon until midnight. However, all classes, staff operations, and student services will remain online for the entire day. Normal operations and schedules will resume tomorrow, Thursday, September 24.

Above all, stay safe today and travel cautiously.

When the Texas Board of Law Examiners announced the pass list for the February 2020 Texas Bar Exam, one study group discovered they literally set the bar.

Both Towslee and Horne recently began their jobs as corporate associates in the Houston office of Locke Lord LLP.

“I am honored to represent STCL Houston as the high scorer on the February bar exam,” said Towslee. “This achievement is far from an individual accomplishment. I never would have earned this accolade without the support of family, friends, and the faculty at STCL Houston. I am forever grateful that I chose to attend STCL Houston, and that decision will benefit me for the rest of my life.”

Towslee and Horne benefited from the hands-on, individualized training they received from STCL Houston alumna and Assistant Dean of Bar Preparation and Academic Support Lisa Tilton-McCarthy Yarrow ’96 and her team of dedicated bar prep coaches and alumni volunteers who prepared students for the exam.

“Though we aren’t surprised, we couldn’t be prouder of Case and Zac,” said Yarrow. “This is just the first of a long line of great accomplishments to come for both of these tremendous young lawyers.”

Towslee recently enjoyed the privilege of participating in a virtual swearing-in ceremony with Justice Brett Busby of the Supreme Court of Texas. With his right hand raised and his wife, Traci, and young daughter, Caroline, at his side — and his extended family watching remotely from their computers — Towslee took an online oath to become an official member of the Texas Bar.

Busby administered the oath to Towslee, Horne — and more than a dozen other newly licensed attorneys — and invited other new Texas law graduates and successful bar exam takers to follow their example. “One of my favorite parts of the job is welcoming new lawyers to the profession,” Busby told the Houston Chronicle this week.

“It takes a village for one person to even pass the bar,” said Horne. “Case and I were lucky enough to have Dean Yarrow and her team, a study group consisting of friends, and extremely supportive families.” 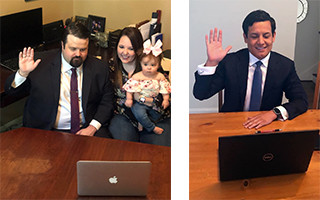