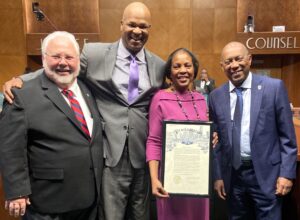 Council members took turns congratulating Boykins, recognizing how she has “inspired other women to take on big, public roles” and “served as an inspiring role model for the diverse Houston community,” among a variety of accolades. The honor was actually given on International Women’s Day, a fortunate coincidence.

Vice Mayor Pro-tempore Martha Castex-Tatum chaired the meeting, and she concluded the celebration of Boykins by saying, “This is your time, this is your season, and we’re so proud of you. Congratulations!”

Several council members highlighted Boykins’ recent board chair appointment for STCL Houston, noting her strong leadership for the important and historically significant role. At the law school’s Dec. 8 board meeting, Boykins became the first woman and first African American to win election as chair of the Board of Directors for Houston’s oldest law school. 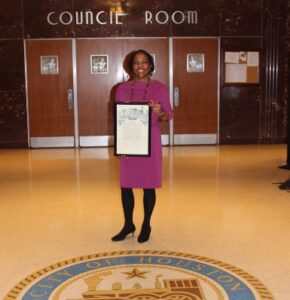 Council members noted the major impact STCL Houston has had on the City of Houston and praised Boykins for her service and leadership at the law school and for other organizations, including as co-chair for the Texas Minority Counsel Program, as a board member for the Downtown Management District, and as a founder of the faith-based Pyramid Community Development Corporation.

Boykins also was recognized for her business leadership as co-owner of La Maison in Midtown, an upscale bed-and-breakfast hailed by Travel + Leisure magazine as one of “11 amazing black-owned hotels around the world.”

She previously served as regional assistant general counsel of NRG Energy, Inc. and Reliant Energy for 31 years. In 2018, Boykins retired from a full-time position with NRG, but she continues in a part-time role supporting Reliant Energy’s  community relations  and sponsorship marketing team.

Boykins and her husband, Dwight — a former member of the Houston City Council, District D — are active in the city’s political and social communities and donate their time and resources to help others reach their full potential in life.