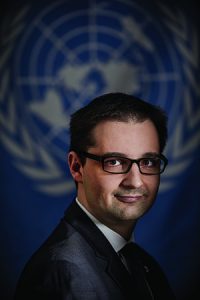 Plamen Novakov ‘17 is a Bulgarian native who immigrated to the U.S. at age 13. As a child, Novakov spent most of his school vacations with his grandparents, taking trains to neighboring European nations and boarding flights to such far-flung destinations as Egypt and China.

“I developed a fascination with other cultures and history from a young age,” Novakov said. “I learned early on the power of language to connect with people.”

Novakov took to heart his belief in the power of language. He is proficient in five languages: Bulgarian, Russian, French, English, and Macedonian, a South Slavic language spoken by only 3 million people worldwide. His interest in the law began at a young age, too. He had always looked up to his grandfather, a lawyer in Bulgaria’s equivalent of the JAG Corps.

As a history major at Sam Houston State University, Novakov’s leanings toward the legal profession were affirmed as he became increasingly aware of the law’s recorded influence on the progress of societies. As he learned more about how the United Nations (U.N) takes these efforts to a global level, Novakov set his sights on a highly competitive U.N. internship.

Following the U.N.’s extensive, demanding selection process, Novakov secured the internship, and because of his dual citizenship, he had his choice of the U.S. and Bulgarian posts. He chose the office where he thought he could do the most good in the six weeks he would spend in New York City.

“The Bulgarian mission has a much smaller staff, and I knew I would be able to get more experience and make a greater impact there,” he explained.

Novakov worked directly with Nikolay Vanchev, the first secretary of Bulgaria’s Permanent Mission to the U.N., second in command after the country’s permanent ambassador. His post was the U.N.’s Sixth Committee, which drafts resolutions regarding international law and counterterrorism for consideration at U.N. General Assembly meetings.

If it was experience he was looking for, Novakov got it. His first assignment on day one was to draft a memo to the president of Bulgaria, advising him on an upcoming vote for the U.N.’s next secretary general!

“It was an experience of a lifetime. Representing a nation at the U.N. is the kind of awesome responsibility that ultimately changes a person. It was overwhelming sometimes, but I loved it. I could do this for the rest of my life.”