Nearly 100 lawyers, activists, government officials, and nonprofit leaders from across the state converged at South Texas College of Law Houston (STCL Houston) recently for a conference billed as this year’s most important animal welfare event in Texas: “The Lone Star State Update on Animal Law.”

Professionals and law students benefited from networking with other animal welfare leaders, learning about pro bono opportunities in the field, and joining forces with others who care passionately about animal protection and advocacy.

STCL Houston professors Fran Ortiz and Elizabeth Dennis, who serve as assistant dean and director of South Texas’ Animal Law Clinic, worked closely with officials and attorneys from throughout the state to organize the event, which included numerous panel discussions. Attendees learned from presentations titled, “Achieving Justice for Animals: Interpretation of Anti-Cruelty Laws,” “Getting Political for Animals: Recent Developments in Legislation,” and “Animals in Civil Matters: Shelter Transportation and Estate Planning.”

“Collaborating with ALDF on the Lone Star State Update on Animal Law raised awareness of what STCL Houston is doing to promote animal welfare in Texas, from our active student ALDF chapter to our Animal Law Clinic and its outreach to local governments, nonprofits, and individuals,” said Dennis. “And bringing ALDF’s amazing depth and breadth of resources to the attention of Texas’ animal welfare activists is a gift that will grow exponentially.”

The conference also included a special topic panel on ALDF’s recent lawsuit against Houston’s Downtown Aquarium and Landry’s Inc. The panelists — including Adam Milasincic, trial attorney for The Ammons Law Firm; and Daniel Waltz, staff attorney for the Animal Legal Defense Fund — reviewed ALDF’s lawsuit against Landry’s, alleging violations of the Endangered Species Act based on the restaurant group’s treatment of four captive tigers. They also discussed Landry’s’ failed counter-suit brought under the Texas Anti-SLAPP (Strategic Lawsuits Against Public Participation) statute. The attorneys concluded their presentation by sharing what the future holds for the tigers — named Nero, Marina, Coral, and Reef.

“From the relationship between animal abuse and crimes against children, to a primer in real estate planning for clients with beloved pets, to the growing commercial issues in pet and rescue transport, to new legislation, this event continued to surprise me with how rapidly the law is catching up to our burgeoning collective conscience toward the creatures with whom we share the planet,” she said.

Some of the state’s most notable animal rights experts and activists presented at and attended the event, including:

“Animal cruelty is still very present in today’s society, but so is the growing community fighting for those animals that suffer such tragedy,” said Sarah Dimas, co-vice president of STCL Houston’s ALDF student chapter. “The Lone Star State Update on Animal Law was a great experience that shed light on the strength of this united front.”

Each year, ALDF volunteer attorneys contribute thousands of hours in service toward the mission to protect the lives and advance the interests of animals through the legal system. Attorneys interested in joining this pro bono network can visit www.aldf.org/probonofor more information. 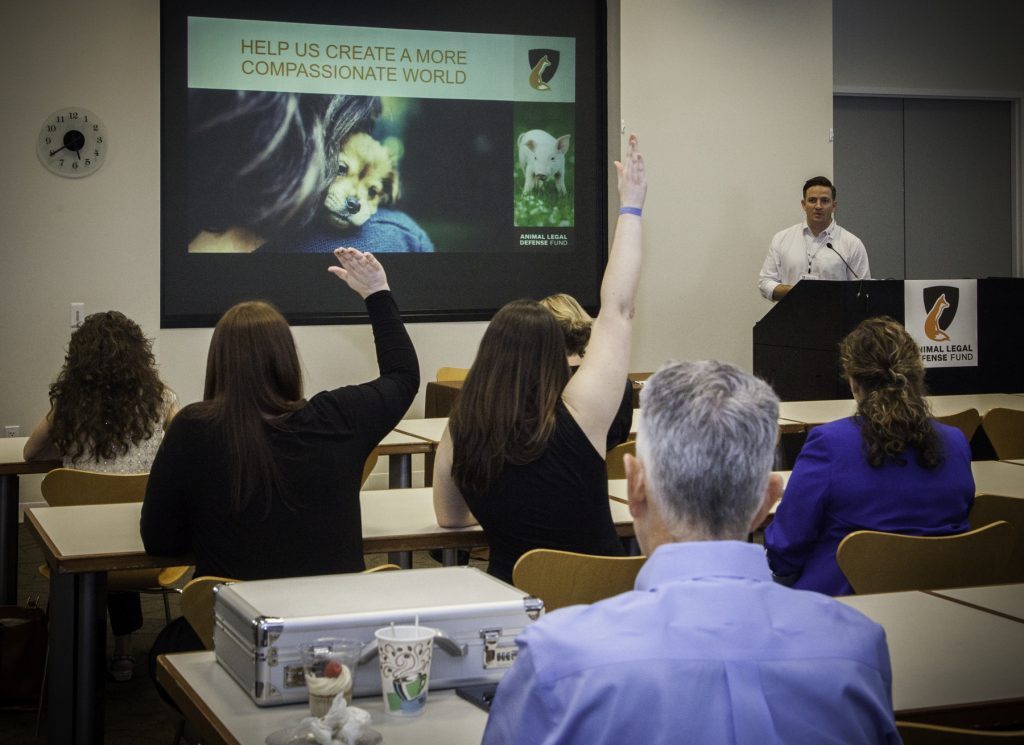 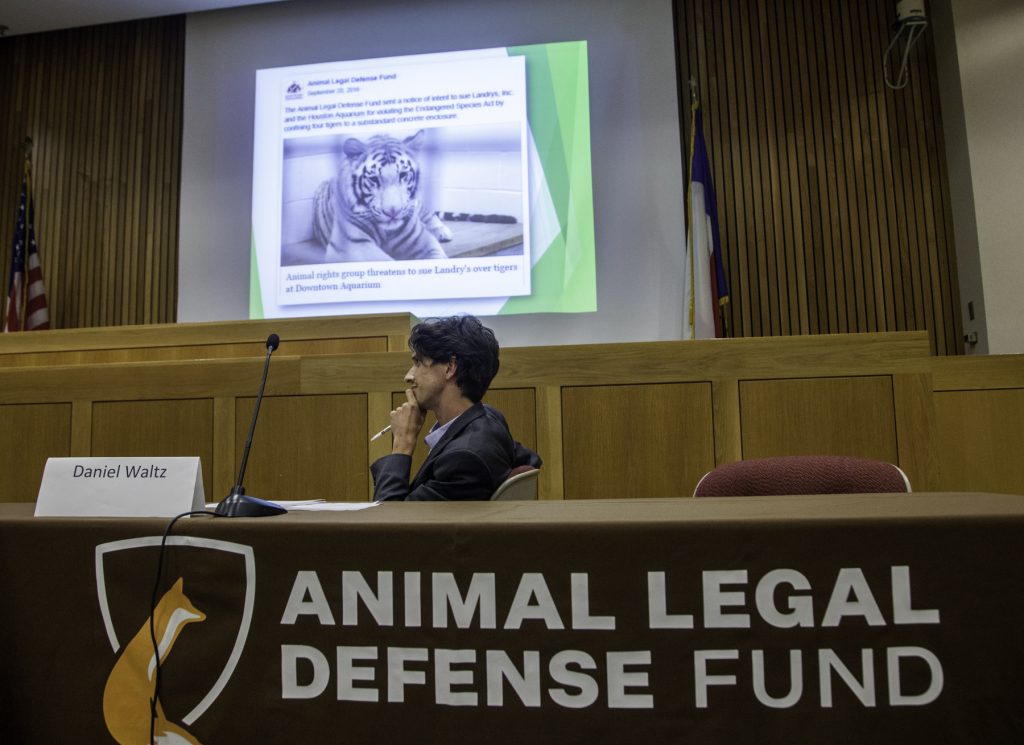 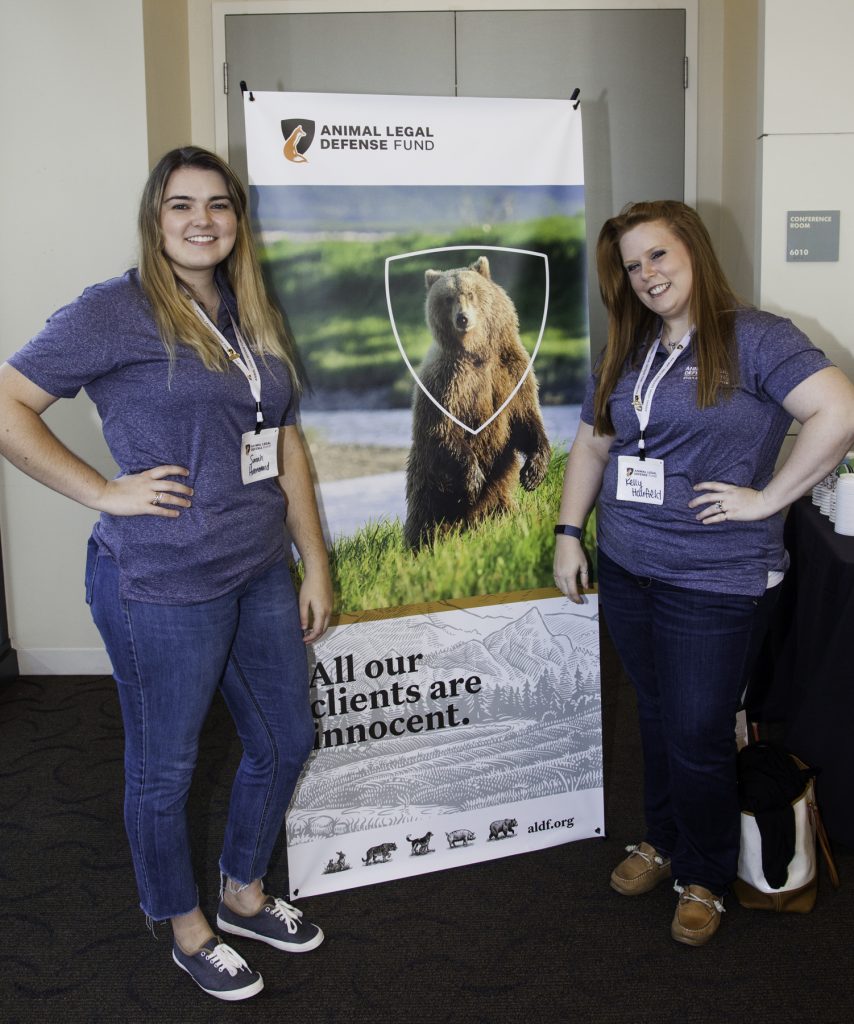 Sarah Hammond and Kelly Hairfield — leaders in STCL Houston’s ALDF student chapter — join dozens of animal welfare experts and activists from across the state for an event billed as this year’s most important animal welfare event in Texas: “The Lone Star State Update on Animal Law.”