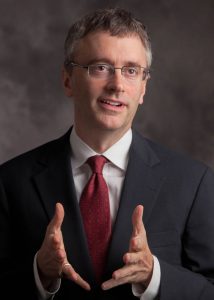 According to the J. William Fulbright Scholarship Board, “the Fulbright Program aims to increase mutual understanding between the people of the United States and the people of other countries and is the flagship international educational exchange program sponsored by the U.S. government.” Kulander joins the more than 380,000 “Fulbrighters” – including 59 Nobel Laureates, 82 Pulitzer Prize winners, 71 MacArthur Fellows, and 16 Presidential Medal of Freedom recipients – who have participated in the program since its inception in 1946.

“I feel tremendously honored to win a Fulbright award, a recognition and opportunity I have long both admired and desired,” said Kulander. “I am grateful for the chance to teach international law students and research ways in which North American contributions to the energy market in Lithuania may bolster the economic, political, and commercial stability of the Baltic region.”

Through his research in Lithuania, Kulander will seek to determine the economic, political, and legal possibility of exporting significant amounts of North American-sourced liquefied natural gas (LNG) to the Baltic region, whether local sources of natural gas may augment the area’s imported LNG, and whether this American-led effort may deliver some measure of economic and geopolitical security to the region.

Kulander, who serves as the director of STCL Houston’s Harry L. Reed Oil & Gas Law Institute, notes that, at the conclusion of his research, “My goal is to write a comprehensive article analyzing and describing the feasibility of exporting LNG from North America to Lithuania and other countries around the Baltic Sea. A secondary goal is to study locally derived sources of natural gas from shale formations found in Lithuania and its neighbors located along the northern Carpathian belt.”

He underscores the importance of establishing and maintaining energy security for Lithuania and other Baltic countries, noting this priority is a “crucial component of national security for each country bordering an increasingly aggressive and often unpredictable Russia, particularly during a time of upheaval within both the European Union and NATO.”

Kulander’s Lithuanian course will include a survey of oil and natural gas exploration and regulatory law in North America, Europe, and beyond; an examination of other energy sources, including coal, wind, geothermal, nuclear, solar, hydroelectric, and other renewables; and an overview of energy exploration in Europe, the Baltic region, and Lithuania. His classroom instruction also will include geopolitical topics, such as the United Nations Law of the Sea, international maritime law, exploration rights and national claims in the Arctic, and an introduction to natural monopolies and the application of ratemaking principles to utilities.

Kulander, who has taught energy law at VMU for the past five years, also plans to expand his role as a permanent visiting professor at the university by serving as an advisor for students’ graduate theses and dissertations during his Fulbright exchange.

Kulander earned bachelor’s and master’s degrees in geology from Wright State University, a doctorate in geophysics (petroleum seismology) from Texas A&M University, and a law degree from the University of Oklahoma College of Law. His expertise includes domestic and international energy law, oil and gas law, mining law, and property law.

“The international energy market is dependent on prices and politics, and although it is almost impossible to predict the individual events that affect energy prices, North American LNG will flow to Europe in increasing quantities for the foreseeable future. A project like I propose, localized on a frontier yet untapped by North American exporters, will provide a novel analysis of this potential market and maybe even encourage further cooperation. Hopefully my presence in this land on the frontier of Russia also will help foster a more cooperative spirit in the legal education systems of America and Lithuania,” said Kulander.