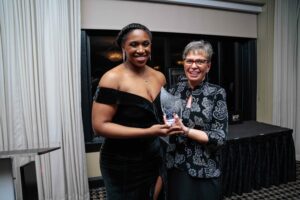 “It was such a joy to be able to honor Dean Jenkins in this special way,” said Heaven Smith, BLSA president and coordinator of the gala. “She is an amazing role model, and we all think the world of her.”

The crowd of more than 150 people demonstrated their love and admiration for Jenkins with multiple standing ovations. Mayor Sylvester Turner proclaimed March 5, 2022, as Helen B. Jenkins Day for the City of Houston. 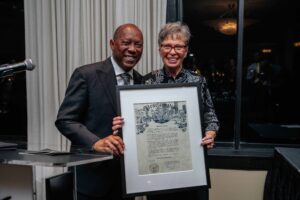 When speaking to the crowd before accepting the prestigious award, Jenkins acknowledged the outpouring of love she felt, and said to the crowd, “The thing about love is when you give it, you get it back.”

Jenkins attended Johns Hopkins University’s Peabody Conservatory of Music and earned a master’s degree in music from Howard University. She is also an alumna of the University of Houston Law Center.

At STCL Houston, she teaches, writes and speaks in the areas of wills, trusts, estate administration and guardianship law. Jenkins has authored several books and articles, and her scholarship has appeared in law reviews of Harvard Blackletter, Baylor, Alabama and Seton Hall.

She is the founder and director of STCL Houston’s Professor of Law Diversity Initiative and was awarded the Roberson L. King Excellence in Education Award during the 50th anniversary of the Houston Lawyers Association. With her background in music, she also served as the national anthem soloist at all South Texas graduations and is a featured performer for the Houston Bar Association’s “Night Court,” an annual, all-lawyer musical benefiting Houston area law charities.