STCL Houston grants diplomas to 213 at May 2017 commencement ceremony

South Texas College of Law Houston board members, faculty, administrators, and staff – and an auditorium full of friends and family – proudly supported more than 200 graduates as they collected their diplomas at the school’s May 2017 commencement ceremony held at the George R. Brown Convention Center this week.

The graduates were inspired by the words of Circuit Judge Jimmie V. Reyna of the U.S. Court of Appeals for the Federal Circuit, who served as the commencement speaker.

STCL Houston board member and alumnus Bernardino “Benny” J. Agosto Jr. ’95 – whose son Bernardino Agosto III is in the May 2017 graduating class – introduced Judge Reyna as, “One of the most influential Hispanic lawyers – and people – in our country.”

Reyna told the graduates, “I’m often asked, ‘Judge, what are the most important cases you’ve ever handled?’” He explained how it wasn’t the national, news-making cases involving some of the country’s largest companies and groundbreaking technologies. Rather, he told the graduates two memorable stories.

In the first, Reyna was granted a kindness by a stranger during his early days as a lawyer in private practice. A jewelry store owner who noticed how Reyna frequently admired the watches in his store gave him a $100 watch – asking him to pay for the gift as he was able. He also gave him invaluable advice, “Stand right. Do right. Be right.”

Shortly thereafter, he took his first case in private practice – incorporating an association for Hispanic engineers – only to realize that his client needed him to handle the case pro bono. At that point, he remembered the lesson from the jewelry store owner, which he interpreted to mean: stand up for those who are less fortunate and honor attorneys’ responsibility to improve the lives of others in the community.

Reyna shared that he continues to strive toward this goal each day of his practice as a judge. 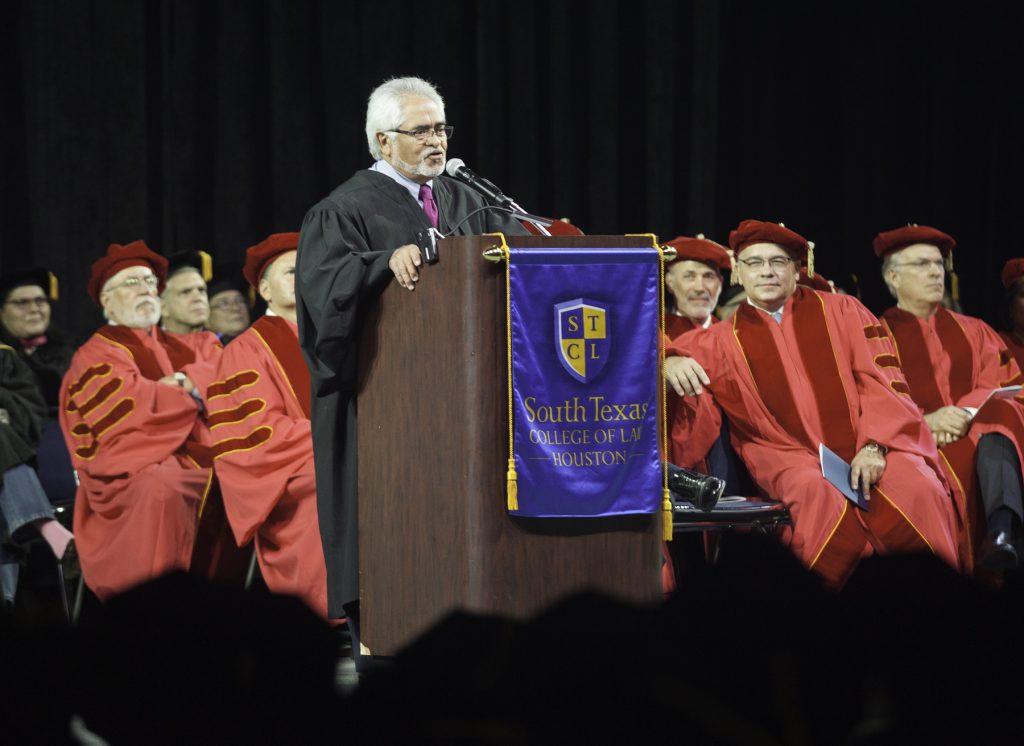 President and Dean Donald J. Guter also addressed the graduates, noting, “I can’t overemphasize the enhanced power you now hold to make a difference in the world, one life at a time. Don’t shrink from this opportunity – embrace it, but do respect the impact you have on people… I ask you to bear this burden proudly… you’ve earned it. But, also bear it willingly… you owe it.”

Nick Lanza Jr. ’89, president of the STCL Houston Alumni Association, also addressed the graduates and encouraged them to “Follow the rule of ABCD,” which includes remaining accountable to their family and colleagues, brave in all the challenges they face, compassionate toward those in need, and to make a difference – in the courtroom, office, and especially throughout the community.

During the ceremony, Student Bar Association President Taylor Christie presented the school’s administration with a check for more than $5,000 as a gift from the graduating class.

Class valedictorian Hayley Hervieux also addressed her fellow graduates, stating, “I didn’t know that my law school experience would not only be informative, but transformative, as well. I didn’t know at the time how much learning to be a lawyer would change me for the better… Class of 2017: You all challenged me to work harder than I thought I could, and inspired me to aim higher than I thought I could. Today, I’m not the same person I was on my first day of law school, and I’m sure that’s true for many of us in this room today. We’re better writers, better speakers, and better thinkers than when we first walked through those doors.”

She continued, “And that’s what makes this school so special: It’s not a name, it’s not a place; it is the people who make up that place… The professors who take on the monumental task of training us to be future lawyers and who care so much about our successes. The coaches who volunteer time in their busy schedules to help us learn practical skills. And most of all, you – the students.”

The graduates and their families and friends enjoyed a celebratory lunch reception, hosted by South Texas in their honor, immediately following the commencement ceremony. 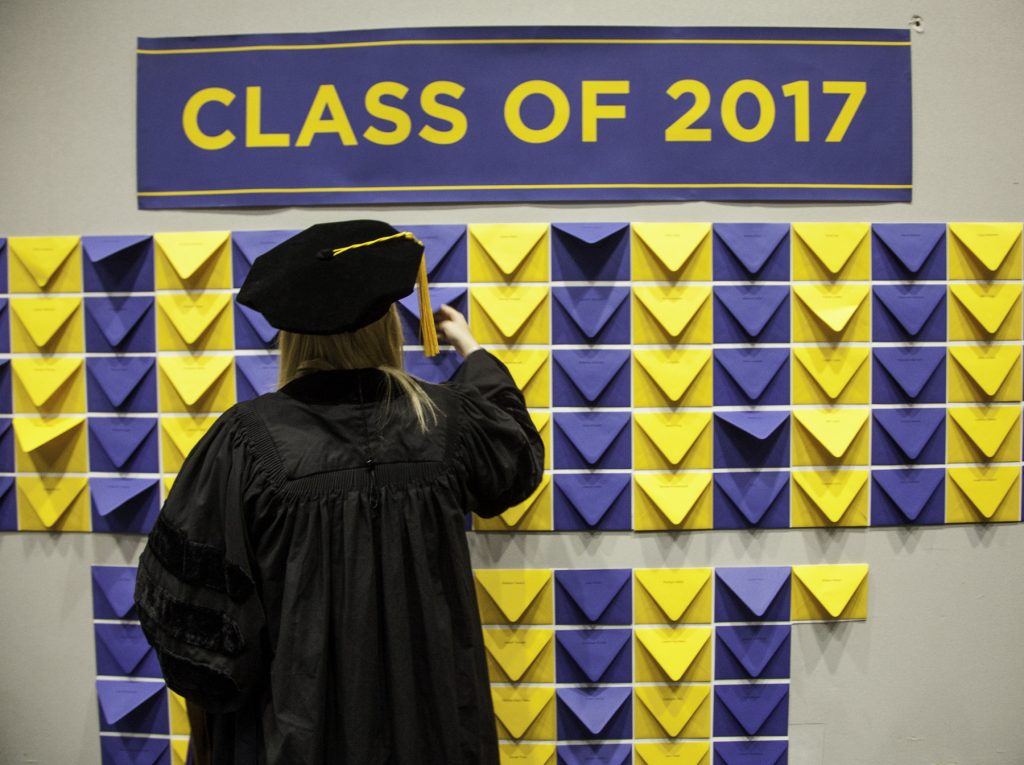 A South Texas College of Law Houston graduate searches for her name on a wall of personalized notes from members of the law school’s alumni association.