Maria Castillo Valle – an immigrant from Guatemala, award-winning community service advocate, and daughter of a prominent immigration attorney – will follow in her mother’s footsteps this Monday, May 15, earning her legal degree from South Texas College of Law Houston. Her mother, South Texas alumna Silvia Mintz ’08, will place the honorary graduation hood over Valle’s neck at the school’s commencement ceremony.

From a non-English-speaking child immigrant to a well-educated lawyer accepted this week into both the Master of Laws (LL.M. in Taxation) programs at the Levin College of Law at the University of Florida and Georgetown Law, Valle embodies the importance of civic engagement reinforced by her family from her early years.

Valle and Mintz exemplify the American dream. One year after Mintz immigrated to the United States in 1996, six-year-old Valle joined her mother, who had enrolled at Houston Community College to learn English. During their first year in Houston, Mintz cleaned houses to support herself and her young daughter, and supplemented her mastery of the English language by reading children’s books in homes where she also babysat. Valle herself learned English by watching American television with Spanish subtitles before enrolling in a bilingual elementary school.

Following Mintz’s studies at HCC, she felt empowered to continue her education at the University of St. Thomas (UST) – which would become Valle’s alma mater years later – where a professor encouraged her to pursue law school.

Valle’s own roots with Houston’s oldest law school date back to her middle school years when her mother brought her to South Texas College of Law Houston because she couldn’t afford a baby sitter. While Mintz sat through lectures, Valle read in a study room of the school’s Fred Parks Law Library. Over time, Valle became friends with her mother’s law school classmates and professors, who helped her with challenging math and science homework, often over pizza dinners.

“I was accepted to several law schools, but already knew South Texas College of Law Houston as home,” Valle said. “I see everyone at South Texas as my extended family. I have fond memories of Professors Geoffrey Corn and Shelby Moore sharing pizza with me as a teenager, and I knew they would be there for me as a law student, as well.”

As both an undergraduate and a law student, Valle continued the volunteer work she began long ago helping her mother’s clients complete immigration forms at various pro bono legal forums. Among her many community service awards and responsibilities, Valle:

“Maria’s service both to the school and to low-income Houstonians in our community is extraordinary,” said STCL Houston Associate Dean Bruce McGovern. “She regularly goes above and beyond in her efforts to give back to others and to assist those who face the same cultural obstacles she now has overcome. As a student enrolled in our Tax Clinic, she does an outstanding job representing clients and regularly volunteers for extra projects. For example, Maria developed a “Know Your Rights” tax flyer that she translated into Spanish and presented to several Spanish-speaking communities in her free time.”

Valle and more than 200 of her classmates will participate in South Texas College of Law Houston’s spring commencement ceremony on Monday, May 15 at 11 a.m. in the general assembly hall of the George R. Brown Convention Center, followed by a reception in the center’s grand ballroom. Judge Jimmie V. Reyna, appointed to the United States Court of Appeals for the Federal Circuit by President Barack Obama in 2011, will serve as the school’s commencement speaker.

“South Texas College of Law Houston opened its doors to me years ago and provided me with quality education that changed mine and my daughter’s life forever,” said Mintz, Valle’s mother, founder of Silvia Mintz, PLLC, and counsel for both the Mexican and Guatemalan Consulates in Houston. “Now Maria is on her path to become a very successful professional without forgetting that we as lawyers have the responsibility and the ability to effectuate change and achieve social justice by improving the lives of many in our community one pro bono case at a time.” 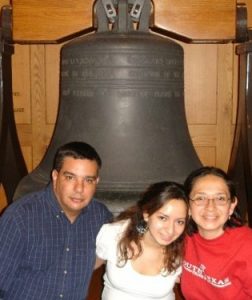 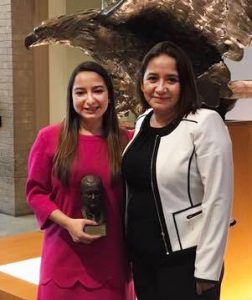